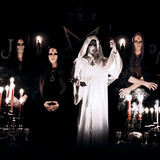 Hetroertzen is a black metal band formed in 1997 by Deacon D. The group originated in Puerto Varas, Chile and by 2009 had relocated to Västerås, Sweden. It was initially a solo project until Deacon D. decided to make a band of it and so joins guitarist Åskväder the band in September 1999. During their first 10 years of existence, a couple of albums were recorded and a handful of gigs were performed in their homeland of Chile. Various lineup changes occurred The band had a brief hiatus for various reasons, but in 2009 after resurfacing in Sweden in the city of Västerås, Deacon D. and Åskväder recorded ‘Exaltation Of Wisdom’, which was later released in 2010 by Lamech Records. In October 2013, the band went out on their first ever tour, alongside Troll and Dødheimsgard. During 2014 Hetroertzen recorded material for a new full length album which allowed them to stretch the boundaries of their already unique sound. ‘Ain Soph Aur’ saw the light in December 2014. It was released by the collaboration of Lamech Records, Terratur Possessions and Amor Fati Productions. In the fall of 2015 Hetroertzen conquered USA for the first time and performed two very exclusive shows in New York and Baltimore. Also in 2015 the band confirmed to do their second European tour. During 2016 Hetroertzen focused mostly on the composition of their upcoming album, which was released in early 2017 by Listenable Records. Webpage: www.hetroertzen.se