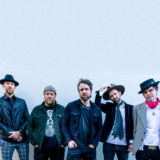 Bursting onto the scene in 2004 with their hit single “Not Ready To Go”, which became the most played song on Canadian rock radio that year, highly acclaimed, east coast bred rockers the Trews - consisting of founding members Colin MacDonald, John-Angus MacDonald & Jack Syperek - have since become a staple of the Canadian music scene and abroad. With 19 top ten rock singles to their name (two of which reached number one), 6 gold certifications (4 albums & 2 singles) and support slots for the likes of the Rolling Stones, Bruce Springsteen, Robert Plant, KISS, Guns’n’Roses, Aerosmith, Kid Rock and Weezer, the veteran rockers are showing no signs of slowing down with the 2021 release of the single “I Wanna Play” from their forth coming 7th studio album. Widely considered one of Canada’s best live bands, the Trews are not to be missed in a concert hall near you!