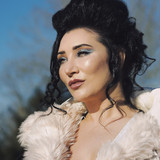 BLINDING LIGHTS - Rachael's latest single is out on 20th August 2021! Rachael Hawnt is a passionate, unsigned, self-funded and self-releasing artists who writes and produces music in varying styles including pop, rock and dance. Her songs are about life, emotion, love and loss. As a story teller Rachael immerses herself in the message of the lyric and mood of the piece. Drawing inspiration from personal experiences, she relates to her audience and gives honest performances both live and on track. Some of Rachael’s creative inspiration's are drawn from legends such as Queen, David Bowie, Kate Bush and more contemporary artists such as Sia. Lady Gaga and Billie Eilish. During her career Rachael has performed as a session vocalist for artists including Tony Hadley, Paul Young, Bonnie Tyler and Pixie Lott and shared stages with the likes of Will Young, Bob Geldof and Ray Davies. In 2018 Rachael was head hunted to appear on BBC1 singing show ‘Altogether Now’ where she became a finalist and achieved the 2nd highest score of the series. Rachael and long-term collaborator Ash Cutler are the musical force behind most of Rachael’s current projects including her self-penned debut single and duo project The Beautiful Secret where their debut single ‘What’s Inside’ was the anthem for World Autism Awareness Week 2017 which featured on BBC Radio 2 and Channel 4’s Sunday Brunch. Most recently their cover of '500 Miles' featured on BBC Radio 4's Desert Island Discs with Steve Backshall.