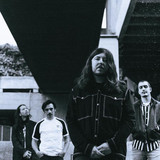 Swedish Death Candy are drummer Marco Ninni, guitarist Francesco Codardo, bassist Jiwoon Wang, and vocalist/guitarist Louis Perry. Pulling influence from the likes of Black Sabbath to Queens of The Stone Age via Can and The Beatles to Oasis, SDC’s music ebbs and flows from beautiful soundscapes to hellish psychedelic trips, all focused through a barrage of increasingly crushing riffs slathered in distortion and utilising as many FX pedals as seems humanly possibly. A live force to be reckoned with, anyone who’s seen them performing in the flesh will testify that SDC are capable of upstaging most bands they play with, no matter how skilled or established. Whilst out in Europe, not only were they selected for a filmed session with Seattle’s infamous KEXP at Transmuicales, but they also performed their debut album top to bottom for legendary French Music show ‘Album de la Semaine’ on CANAL+ (whose recent guests include Idles and The Breeders). Early support slots with Wand, Yak and Kvelertak all opened the door to critical praise from Dan P Carter at Radio 1, NME, Clash Magazine, DIY, The Line of Best Fit, The 405, and The Metro, with performances at festivals such as Eurosonic, Transmusicales and Desertfest cementing their reputation as one of the most incendiary new live bands on the circuit.