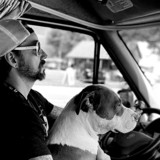 “7 yrs a Vagabond, 5 yrs in meditation/contemplation.

Being alone has been the greatest gift & to know thyself my greatest discovery.” At eight-years-old, Wes got his first guitar and the rest is, as they say, history. Playing professionally since the age of sixteen, Wes has kicked his fair share of sawdust around in bars and honkytonks. With a distinctively traditional, rich country voice and some tough-guy tattoos, Wes has a sound and a style all his own. ​Wes has released two records, 2009’s “Full Circle” and 2019’s self-titled “Wes Hayden”. The past few years found Wes reconnecting and finding balance in all things.