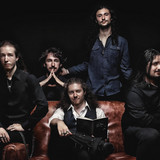 AVALAND is an epic and symphonic metal opera - from Grenoble, France -

directed, written, and composed by young 22-year-old prodigy Adrien G. Gzagg. Inspired by heroic fantasy, history, mythologies, and esoterism, Gzagg decided to create an epic story with 8 characters. Entitled "Theater Of Sorcery", the debut will be a theatrical metal adventure that tells the story of a young sorcerer Adam Wilstorm who could be the salvation of bringing back the light to the kingdom of Avaland and during his journey, he must learn to control his powers linked to the Storm. For AVALAND, Gzagg reunited with four musician friends Camille Souffron (Bass), Christophe Feutrier (Guitars), Lucas Martinez (Guitars), and Léo Mouchonay (Drums) that he has performed with in the past to help him to record the metal opera's debut full-length. The record also includes talented guests for vocals and guitars with Ralf Scheepers (Primal Fear), Zak Stevens (Savatage/TSO), Zaher Zorgati (Myrath), Emmanuelson (Rising Steel), Stéphan Forté (Adagio), Madie (Nightmare) among many other great musicians. "Theater Of Sorcery" Out April 2 via RockshotsRecords