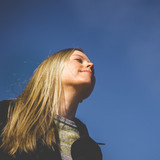 Margaret McLarty is a Scottish singer-songwriter and multi-instrumentalist. She released her debut album "Brigid's Birds" in 2017. It is a collection of songs that draw inspiration from a landscape of people and places from Glasgow to the island of Iona to a Zambian church and back again. Joined by Hinba bandmates Jane Bentley and Tom Sissions and recorded by Angus Lyon at Gran's House Studio it has been called "a tiny feathery masterpiece", "full of warmth and feeling", the songs "wistful and poignant".