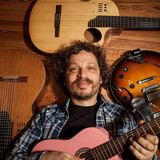 Guitarist, composer and producer Ernesto Snajer was born in Paternal, in the city of Buenos Aires, on April 6, 1968. In 1985, he met the pianist Hernán Lugano. Together they formed the Argentine music group “Semblanza”. In 1991, he went to live in Copenhagen for a year, at the invitation of Palle Windfeldt. From 1993 to 1995, he accompanied Pedro Aznar (known for his work with the Pat Metheny Group) in the shows “Tributo a Gardel”, “Juntos por Troilo” and “Homenaje a Piazzolla”. In July 1994, he joined Lito Vitale’s group “Los Argentinos”. In 1998, a childhood dream became reality whenthe maestro Egberto Gismonti produced a CD by Copen-Aires (Snajer -Windfeldt)

for his label Carmo/ECM. Since 1999, he has led his own formations. He has worked extensively as a composer of original soundtracks for theater, cinema and TV. As sideman, he reroded more than hundred records. Since 2012, he has been presenting the music program “Notas de paso”, transmitted by Canal Á, a dedicated cultural TV channel that broadcasts in Argentina and Latin America. The long list of guests that have participated in the program includes Ralph Towner, Hermeto Pascoal, Mike Stern, Naná Vasconcelos, the Ron Carter trio and Sylvain Luc. Ernesto currently divides his time between concerts with his trio and two duos: DE DOS ARGENTINOS alongside the guitarist Matías Arriazu and ZABECA DÚO, with Mariano Cantero. In 2019, Snajer won the premio Gardel for “Notas de Paso 2”.