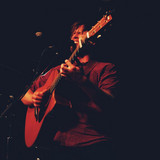 Five years ago, Alex Gibson embarked on a musical journey from Sydney to London – the iconic home to many of his musical influences. Having released his debut album ‘This Is Life’ in 2012, he embraced the next step of his career and quickly earned a reputation as one of London’s hardest working and most exciting musical acts. Alex has performed at various London venues, including The 100 Club and OMEARA. He was also featured as one of Time Out London’s rising star acts in 2016 and was runner up in the ‘Songs of War’ competition in 2018 which was judged by the likes of Joss Stone, Dave Stewart and Mike Rutherford. From busking on Portobello Road, to performing at Sofar Sounds, Alex’s style is adaptable, soothing and raw, with appeal across various generations and stages. Inspired by both classic and modern genres, the new album ’Thirty' is a culmination of Alex’s own timeless sound and his immense passion, skill and determination. 2021 will mark the release of Alex’s sophomore album 'Thirty'. After five years in the making, this album will take you on a journey of real emotions with beautiful and varied delivery, reflecting everything that defines Alex Gibson.