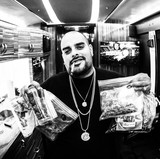 Rapper and entrepreneur Berner made a slow rise from the mixtape underground in the 2000s, later signing with Wiz Khalifa's Taylor Gang Records in 2012 for the release of his fourth set, Urban Farmer. In addition to his solo work, Berner is also a prolific collaborator, issuing over a dozen collaborations with the likes of the Jacka, B-Real, Cam'ron, Styles P, Young Dolph, and Mozzy. A vocal proponent of marijuana, he also owns a shop selling associated clothing and lifestyle accessory items. Born Gilbert Milam, Jr. in San Francisco, he began rapping while still in high school in the mid-2000s, and it wasn’t long before he self-produced and released his debut mixtape, Dirty Sneakers…Plenty of Ways to Get It, in 2007. An avid marijuana enthusiast, Milam spent a lot of time working in cannabis dispensaries while he was building his hip-hop career. It was through his fame in weed circles that he eventually met and became friends with stoner rap icon Wiz Khalifa. Berner was signed to Khalifa's Taylor Gang Records in 2012, touring with the label's family of artists before the release of his first set for the label (and fourth overall), Urban Farmer. Along with consistent musical output, Milam branched out to other business pursuits including fashion lines and even his own genetically engineered original strains of medical marijuana. In the 2010s, Berner issued a handful of solo efforts, including the Billboard-charting 20 Lights EP and Hempire. He also collaborated with a number of fellow rappers, including B-Real (the Prohibition trilogy), Cam'ron (Contraband), Styles P (Vibes), Young Dolph (Tracking Numbers), and Mozzy (Slimey Individualz). Berner released the album El Chivo in May 2019, which included the single "Wassup" (featuring Wiz Khalifa and Chevy Woods). ~ Fred Thomas, Rovi