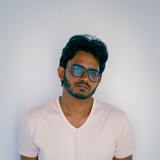 Subee, a Kandyan, born and bred in Gampola Sri Lanka, started his music career as a singer and a music producer following the genre of electronic dance music as his style. He has already endowed his fans with an extraordinary collection of songs, blending EDM with a unique Sri Lankan flavor containing the characteristics of authentic folk melodies. The song ‘Soliya’ released in April 2020 followed by ‘Bowala Manike’ and ‘Chak Gudu’ widened his fan base manifesting his capacity to produce vibrant music that transcends the boundaries of Sri Lankan locality. He also displays a versatility in style through his songs ‘Ru Naari’ and ‘Awaata ne me Ale’ written by Yashodha Adhikari, produced in 2021 with a trend towards Dace Pop genre. The English number ‘That’s Alright’ sung by Anuja Ranasinghe released in 2021 attracted much attention and his debut music video titled ‘Chak Gudu’ possesses a captivating quality and colour. Experimenting novelties is a special feature in his music career.