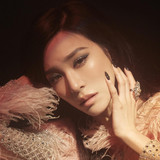 Born in Los Angeles, Young packed her bags and traveled to Seoul, Korea alone at the age of 15, where she would train to be in one of the best-selling female K-Pop groups in Korea. Iconic in their genre, Girls’ Generation have 16 No. 1 singles, 1.8 billion YouTube views, 120 awards from various organizations, and 15 released albums. After world tours, millions of records sold and Tiffany is now in the midst of taking on the world as a solo artist. Tiffany has landed a debut spot, at #5, on Billboards Next Big Sound Chart

[Next Big Sound tracks the fastest accelerating artists during the past week, across all major social music sites, statistically predicted to achieve future success.] On top of that, 2019 has been a breakout year for the Girls' Generation K-Pop Veteran, taking home the win for Best Solo Breakout iHeart Radio Award Winner, and announcing her first ever 18 city North American Tour.