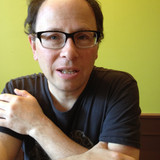 Composer and multi-instrumentalist Peter Bufano is best known for his original scores for Circuses. (The Big Apple Circus,The Bindlestiff Family Cirkus, Circus Smirkus, Spiegelworld). He started as a clown in the now defunct Ringling Bros. and Barnum & Bailey Circus, then shifted to the music department. He is the founder of Cirkestra, a circus pit-band. Cirkestra has toured the United States performing hundreds of shows in and out of the big top including performances at The Kennedy Center, The Seattle Art Museum, and The Isabella Stewart Gardner Museum in Boston.