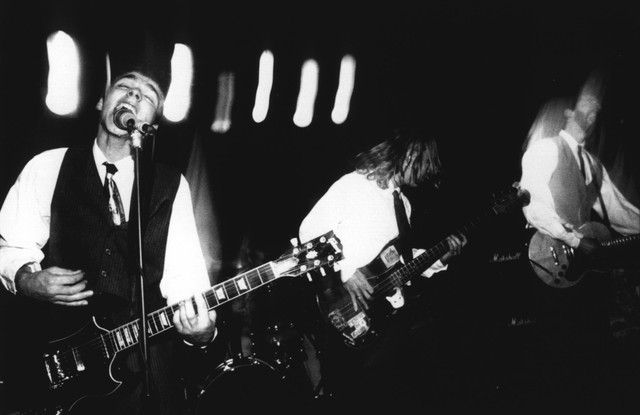 Considering their relatively brief existence, Sunny Day Real Estate racked up enough dramatic twists and turns to rank with some of the great rock soap operas. Their key members engaged in just about every rock cliché imaginable, including finding religion, refusing to work with the media, breaking up, joining a big-name group, and even recording an ambitious full-orchestra pop album -- all before reuniting in 1997. Although formed in 1992 amid the burgeoning hard rock scene in Seattle (and later signed to Northwest power label Sub Pop), the band could not have been more different from its flannel-clad contemporaries. Originally conceived as a three-piece (guitarist/vocalist Dan Hoerner, bassist Nate Mendel, and drummer William Goldsmith), Sunny Day Real Estate garnered attention when they added enigmatic lead singer Jeremy Enigk, whose high-pitched, continually ascending voice complemented their melodic songs. Shrouded in mystery from the get-go, the group released only one picture to the press, conducted one interview, and never played a show in the state of California with all four members. With the release of their 1994 debut album, Diary, Sunny Day achieved newfound fame (at one time posing for an ad by department-store chain Nordstrom), while Enigk converted to Christianity. In 1995, the group broke up, but not before releasing that year's LP2 (which, because of its single-hue design, is usually referred to as "The Pink Album") and prompting speculation as to whether Enigk's born-again status was behind the breakup. Goldsmith and Mendel quickly found work with Foo Fighters, while Hoerner retreated to a farm in Washington. One year after the breakup, Enigk released Return of the Frog Queen, a set of acoustic songs recorded with a 21-piece orchestra. In the meantime, the band maintained a steady Internet fan base, and continued to sell copies of its first two albums. After months of speculation, the group re-formed in 1997 minus Mendel, who stayed with Foo Fighters and was replaced first by former Mommyheads bassist Jeff Palmer, then by ex-Posie Joe Skyward. In September 1998, Sunny Day returned with How It Feels to Be Something On, which was met with critical accolades from fans and critics. The album prompted more media attention than ever, as well as a new tour. The dates also yielded 1999's Live, which helped whet appetites for the second studio album of the reunion (and the first not recorded for Sub Pop). The Rising Tide was released by Time Bomb in 2000, marked by a gentler tone and a stronger prog rock influence that resulted in some of the best reviews of the band's already acclaimed career. However, external forces conspired against the band; Time Bomb's distribution deal with Arista fell through, making promotion and touring all but impossible. Additional difficulties with their management soured sessions for a follow-up, and it was announced in June 2001 that Sunny Day Real Estate had disbanded. By the end of the year, Enigk, Mendel, and Goldsmith had reunited as the Fire Theft, which recorded a self-titled album released in 2003. Enigk recorded his second solo album, World Waits, eventually released in 2006 on his own World Hollow label. The original quartet (including Hoerner) reunited in 2009 for a full North American tour during the summer and fall, plus dates in Europe in 2010. Recording sessions were mounted as well, but the only new material to surface was a single song, "Lipton Witch," part of a split 7" single with Circa Survive released in 2014. ~ Brian Raftery, Rovi