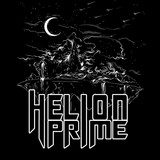 Helion Prime was formed in 2014 based out of Sacramento, CA The band released their debut album in 2015 and it quickly gained recognition across the world. In 2017 the band would re-release the album on AFM records and shortly after in the following year release their follow up "Terror of the Cybernetic Space Monster. Having toured every year since 2015 the band has continued to grow it's fan base and show no signs of slowing down. The line up consist of Mary Zimmer (Vocals), Jason Ashcraft (Gutars), Chad Anderson (Guitars), Jeremy Steinhouse (Bass) and Alex Bosson (Drums). Keep a look out for their third album due in 2020.