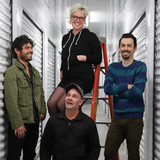 Formed in 2014 from the result of an offhand Facebook post by 23-year-old Tonia Broucek looking to start a band, The Lippies almost instantly created a revival of renewed enthusiasm in their local Grand Rapids, Michigan, music scene and continue to make shockwaves throughout the greater punk community. Much of the band being virtual strangers at those initial practices, they headed into Rick Johnson's (Mustard Plug) Cold War Studios mere weeks later to record a 6-song EP. The following year, the band booked a DIY tour out West, catching the attention of Red Scare Industries’ Toby Jeg along the way at a show with The Lillingtons in Las Vegas. The band was offered a spot on the label’s roster that day and released their self-titled record the following year, accompanied with a tour with punk supergroup, The Falcon. As success was skyrocketing—including an invitation to a coveted slot at Riot Fest and a write-up in Alternative Press—stability within the feminist pop punk quartet took its toll, resulting in a sudden breakup in mid 2016. Two years of silence later, a friendly prod from Toby inviting the band to play that year’s War on Christmas show with the The Lawrence Arms was the catalyst that brought the band back together, stronger and more focused than ever. Their latest single, Acid Head, is a promising sign of what’s to come in their planned 2020 sophomore album and a clear indication that this band has not lost a single ounce of what they had before.