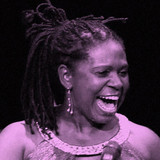 THREE-TIME GRAMMY NOMINEE RUTHIE FOSTER BRINGS HER BIG BAND — LIVE AT THE PARAMOUNT, COMING MAY 15 Featuring arrangements by Miles Davis alum John Beasley and bandleader John Miller, Foster’s latest evokes Sinatra, Ellington, Ella and other swing-era greats on collection of favorite originals and dynamic covers. For nearly 25 years, Foster has moved us with her powerful blues, soul and gospel vocals and eloquent songwriting, which have earned her accolades including three consecutive Grammy nominations and nine Blues Music Awards, but Foster has harbored a hankering to further explore the big band facet of her talent.

Foster joyfully scats and semi-adlibs her way through "Mack The Knife", she invokes both Fitzgerald and Louis Armstrong — simultaneously — and name-drops the man who made it a No. 1 hit: Bobby Darin.