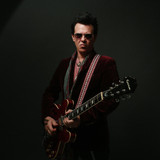 Coming off of an incredible GRAMMY win for 2015’s SHINE FOR ALL THE PEOPLE (Best Roots Gospel album), Nashville rocker Mike Farris keeps it earthy and personal on his new album SILVER &amp; STONE, out September 7, 2018 on Compass Records. The title refers to his wife Julie's wedding ring, and the album is a celebration of their 23 years of marriage and her steadfastness in sticking by him through his years struggling with addiction and alcoholism. Now sober for 7 years, Farris has the energy and conviction of a man saved, a stack of anecdotes and life experiences that would make most people’s heads spin, and a soulful vocal delivery reminiscent of Sam Cooke or Otis Redding. SILVER &amp; STONE isn’t a “gospel” album by any means, but Farris still takes us to church on these 12 engaging tracks, including a cover of Bill Withers’ “Hope She’ll be Happier.” Produced at Compass Sound Studio (AKA “Hillbilly Central” – the birthplace of Outlaw Country) in Nashville by Compass Records co-founder, Garry West, SILVER &amp; STONE finds Farris imbuing his songs with a vibey, lighthearted feel, returning to his roots as a rocker and soul singer. The album weaves through the traditions of American music the way that Tennessee born and bred Farris has done expertly throughout his 25-year career, starting with his major label band, Screamin’ Cheetah Wheelies.<br>