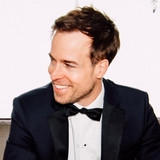 Luke’s signature pop sound fuses early soul with contemporary R&B. Luke McMaster has been thrilling audiences with his unmistakable, soulful tenor since his early days on the music scene as one half of the gold-selling Canadian pop duo, McMaster & James.

He made his first big mark as a solo artist in 2013 with his hit song "Good Morning Beautiful", co-written with multi-Platinum American and Grammy-nominated recording artist, Jim Brickman, which charted #3 on Billboard AC while remaining top 20 for 15 weeks.