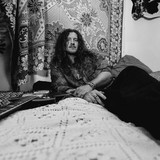 Armed with one guitar--his battered-and-bruised, heavily-customized Gibson Les Paul, aka “Old Glory” - a gritty, soul-stirring voice, and an unshakable spirit, Jared James Nichols reaffirms the power and glory of good ol’ hot-wired, blues-drenched rock ‘n’ roll. Since the beginning, Nichols has carved out his own singular path in the music world and his new songs reveal newfangled sides and a different level of depth to the JJN experience. On Skin 'n Bone, Nichols takes an introspective look at what divides us as people, but also, what should unite us. Known for his high-energy, pick-less guitar-playing from his electrifying riff-‘n’-roll from records like his 2015 debut Old Glory & the Wild Revival, and the 2018 follow up Black Magic, Jared has performed over 400 live dates traveling around the world with his band and performed onstage with giants like Slash, Billy Gibbons, Joe Bonamassa, Zakk Wylde, and the late, great Leslie West, among others. In 2021, Jared was officially welcomed into the Gibson family as a brand ambassador alongside the likes of Slash and Dave Mustaine (from Megadeth), and will release his EP - Shadow Dancer - on September 17th.