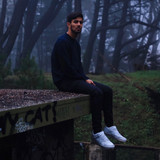 Zakir, a smooth-falsettoed singer/songwriter from the San Francisco Bay Area has set the stage with just himself and his guitar. Created as a "one-man band", Zakir incorporates a loop station for all live shows to build backing tracks to the originals he has composed, as well as written. The beginning of 2015 was a start for the young musician to make a name for himself. Zakir went on to release his debut album titled "Road To Somewhere" in early February.   Zakir then released singles "Veranda" and "Irrelevant Noise" from his highly anticipated second album, which is set to come out in 2018. From upbeat roots to the calming acoustics of his voice and guitar, Zakir's music is the heart of human connection.