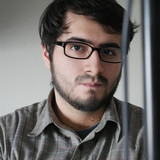 Born in Houston, TX, Marcus grew up with a fascination with electronics and computers. Marcus had musical experience from the violin in orchestra and background from his father's Mariachi group, but it wasn't until his exposure to electronic artists such as Boards of Canada and alt-rock/electronic-inspired Radiohead from websites such as Newgrounds that gave the idea of creating music himself. Having met Tomas in 2006, the two worked closely together refining their musical craft although choosing to keep musical releases separate.