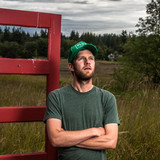 It’s a busy life for songwriter and farmer NATHANIEL TALBOT, who runs an organic vegetable farm and seed company on Whidbey Island, in Washington State’s Puget Sound. When not out cultivating onions on his solar-powered tractor, he’s inside cultivating songs that are rooted in the earth and American traditionalism. “Working in agriculture, while often physically and emotionally tiring, also provides the mental space and quietude for songs to be sown and nourished,” says Talbot. His fifth album, Animal, set for release September 2018 on AWAL, marks his most ambitious and personal crop of songs to date. He began learning piano at age seven, started a punk rock band at thirteen, and quickly thereafter began steeping himself in guitar-driven sounds of Kelly Joe Phelps, Elliott Smith, Bill Frisell and other Pacific Northwest heroes. Over the next 15 years, Talbot honed an approach to songwriting and storytelling, driven by his complex, yet delicate, fingerstyle guitar work, which earned him a distinct place in the northwest folk scene. Nathaniel Talbot’s music has dirt under its fingernails, the product of decades of hard work and crafting – retuning, replanting, and retelling. The result is true American roots music that combines the soulful edge of tradition with the Pacific Northwest’s legacy of freedom and innovation.