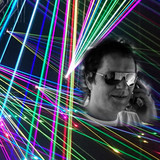 Dj Falk has been a professional international DJ since 1987, and has played from Warsaw in the south to Longyearbyen in the north. He has played at everything from small clubs to large halls and arenas. In September 1996, his trance / dance concept The Arctic Dance Experience was started up, during a gig at Huset in Longyearbyen on Svalbard. His distinctive style of music is, according to himself, inspired by the nature on Svalbard, and the impression the Opera Mountain accident, which happened a few weeks before he arrived in Longyearbyen, made on him.