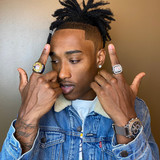 Tytist (age 21) is an up-and-coming hip hop star! He is the total package, rapper, singer, songwriter, producer and studio engineer. His artistry is similar in nature to Lecrae and Chance The Rapper. His style and attention to detail pays off huge with his audience fan base as they know he will always deliver fun, catchy hooks and party starter tracks.   As ‘Lil Bro’ of newly formed duo hip-hop band “Sis N Lil Bro”, Tytist debuted his first EP alongside sister Celena Lena in April of 2020, titled ‘Double Dose’. In 2018, Tytist released his debut album, titled, I Am Liberty with 13 hot songs!! His single "UP!" has a music video on YouTube as his other music is available on all platforms.   Tytist has performed with artists such as Lecrae, XROSS, Tye Tribbett, and performed for stadium crowds of up to 60,000 screaming fans! Tytist's music is undeniably a crowd pleaser and has been known as "THE BEST KEPT SECRET"