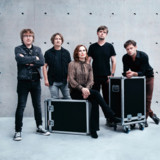 From doom and gothic metal (early years) to triprock with electronic elements and soundscapes; The Gathering's unique sound has always been hard to pigeonhole. The band has seen various line-up changes over the years and has evolved into an eclectic atmospheric rock band. The Gathering was formed in 1989 in Oss, The Netherlands, by brothers René Rutten (guitars) & Hans Rutten (drums) together with Bart Smits (vocals). They were soon joined by Hugo Prinsen Geerligs (bass), Jelmer Wiersma (guitars) and Frank Boeijen (keyboards). Their debut album, Always (1992), also featured Marike Groot on vocals. In 2008 current singer Silje Wergeland joined the band after the previous singer, Anneke van Giersbergen, pursued a solo career. The Gathering have released 19 albums to date, with worldwide sales. No album is similar to the previous one. Some of their most successful songs include Strange Machines (Mandylion), Travel (How To Measure A Planet), You learn about it (Souvenirs) and Echoes Keep Growing (Afterwords). The band toured Europe and the Americas multiple times and performed at festivals like Roskilde, Glastonbury & Sziget. The most recent full length album (Disclosure) was released in 2012. In 2021 the band is working on a new album. Since 1999 The Gathering run their own label 'Psychonaut Records'. The Gathering are: Silje Wergeland (vocals), René Rutten (guitars), Hans Rutten (drums), Frank Boeijen (keyboards) & Hugo Prinsen Geerligs (bass). https://webshopgathering.com