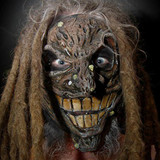 KcaveMen is an Australian Metal band founded in 2005 and based in Adelaide, South Australia. They perform a style of Experimental Metal known as Shock Rock mixed with comedy themes and skits. They are well known by their viral video of a Metal cover to the Spongebob Square Pants theme song, released for the Nickelodeon kids choice awards competition. Over the years, the band had only released internet demos until their debut studio album in 2010 entitled; Gondwanaland which features Todd Hansen of King Parrot / The Berzerker on drums. They went on an Australian tour followed by a performance at Toddfest in Brisbane then opened for Los Angeles based band Devolved before going back on ice again in 2011. In 2020, KcaveMen announced on The Drain Podcast that a new album is almost finished, a single was released in November entitled "Death From Above" with a music video. The album "Evolution" is expected to be released early 2021, ten years after the release of their first studio album.