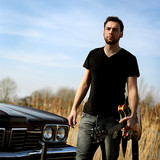 Southern blues-pop with a bit of folk flavor. J.F. Blackstone is known for his percussive guitar playing in which he blends country and blues. Listening to his voice and his songs, you might be reminded of J.J. Cale and Tony Joe White. Though his unique sound evolved over time, Blackstone didn’t go unnoticed, and when his single ‘Spit That Blues’ was released, radio stations started to pick up on it. Soon after, he was invited to appear on national television shows like De Wereld Draait Door and De Beste Singer Songwriter. Ever since, he has been touring the country and has had the honor of opening shows for artists like Chef´s Special, Eric Bibb and Cock Robin.