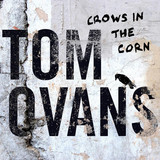 www.tomovans.com Crows In The Corn There’s an incredible story to Tom Ovans new album “Crows In The Corn”. The how and why of it, the way it was recorded, the scope of its 12 songs. From the swampy opening track “Going Back Home” to the last track, the heart breaking humanity of “Avenue of the Americas” the album moves like a 45 year journey through a shattered landscape of an American culture and democracy struggling to hold itself together. Of an artist drifting, of working low wage shitty jobs, of playing music and most importantly of writing songs. It’s all here, the low down folk, blues, country, and rock. From the city streets to the dirt roads and beyond. Tom Ovans plays and sings every note on the album with a primitive untutored originality that defies the lazy critcs. The songs come from the guts of experience, a life of work and music far from the banalities and bright lights of the entertainment industry. Tom Ovans currently lives in Manslaughter, TX with his wife, artist/musician Lou Ann Bardash.