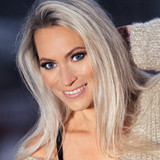 The extraordinarily talented, and hard working, Ellinor Springstrike is widely acknowledged as one of the most exciting Country Music stars in the world today. Her music is highly-listenable, accessible and has a wide appeal.

So it comes as little surprise that her latest two singles, ‘What’s Your Name?’ and ’It’s Never Too Late’ have between them racked up well over two million streams along with airplay all over the world. This fairytale, film worthy, story begins when, quite by chance, the Swedish born Ellinor Springstrike was discovered by the multi-award winning Nashville producer and singer/songwriter Jimmy Ritchey after a Christmas gift of a DNA kit led him to investigate the Country Music artists in Sweden when he discovered he is of Swedish heritage himself. Jimmy Ritchey, who also discovered, and developed the careers, of such artists as Jake Owen, Sam Hunt, Greg Bates and William Michael Morgan spotted Ellinor Springstrike’s exceptional talents, contact was made and one of the most amazing musical partnerships was born.