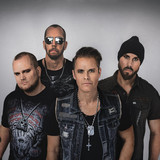 Rian is a melodic hard rock band from Stockholm, Sweden. Richard Andermyr: Vocals, Guitar Jan Johansson: Drums Jonas Melin: Bass Tobias Jakobsson: Lead Guitar Rian was formed by Richard Andermyr and Jan Johansson in 2014. Having been playing together in various constellations for over 10 years they discussed some demos written by Richard and the idea of starting a hard rock band around them came alive. In 2016 Jonas Melin was added to the band lineup on bass. The debut album “Out of the Darkness” was released by Melodicrock records in 2017.

In the end of the same year Tobias Jakobsson joined the band on the lead guitar. In 2018-2020 The band became more of a live unit playing several shows and bars in Sweden. Sophomore album “Twenty-Three” will be released on the 16th of July 2021 by Frontiers Music Srl. www.rianrocks.com