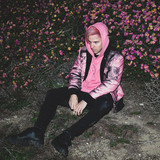 Writing lyrics from personal experiences that touch on sensitive subjects such as mental health, self-medication and escapism, neverwaves (formerly dirty chime) has a sound that spans the gamut— ranging from pop punk to indie to R&B. He has his background as a jazz drummer to thank for his infectious chord play, driving rhythms and silky falsetto.   In 2021 neverwaves has released music with SLANDER, Crankdat, Synymata, Mickey Valen, Arcando and Pixel Terror, on labels such as Monstercat, Dim Mak, Proximity, HEAVEN SENT, Cloud Kid and more. His song Collapse with Pixel Terror was voted onto Monstercat - Best of 2020, and he has also had his music featured on MTV.   neverwaves has garnered press from Forbes, EDM.com, Dancing Astronaut, Run the Trap, Earmilk, Your EDM, and more, and has performed with the brass band Bonerama as well as with Synymata opening for NGHTMRE at Exchange LA. Upcoming releases for 2021 include a collaboration with Egzod on Future Generations as well as a solo release with East West Recordings.