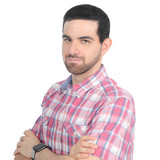 Praised for the “spiritual heights, the drama, the tension” of his music “immersing the listener into a world of sound” (The National Herald, NYC), composer Aris Antoniades creates works for everything from Symphony Orchestras to Jazz Big Bands. He has written/arranged for eight-time Grammy nominee Bobby Sanabria, the National Radio Symphony Orchestra of Greece (ERT), and X-Factor (Greece) judge George Theofanous.   His latest symphonic work, "Chiaroscuro", was recorded and broadcast by the Hellenic Broadcasting Corporation, and his Afro-Cuban Jazz arrangement of Lalo Schifrin’s famous "Mission Impossible Theme" was performed at Dizzy’s Club Coca-Cola in New York (Jazz at the Lincoln Center). More recently, his "Toccata & Fugue" for organ was performed at the Cathedral of St. John the Divine in NYC.  Other important credits include his' "Toccata & Fugue" for organ, which was performed at the Cathedral of St. John the Divine in NYC and, more recently, his original works for Big Band, featured at the 2020 Kypria International Festival and the 7th Cyprus Jazz and World Music Showcase.   His theater credits include collaborations with Broadway veterans, such as composer/pianist Andrew Gerle, and director Joe Locarro - Aris provided orchestrations for their show "Tony Awards: The Early Years". Recently, he arranged and music directed a very successful run of the show "The Impossible Dream" in his homeland, Cyprus. Since 2021 he is the Artistic Director of Trakart Orchestra.