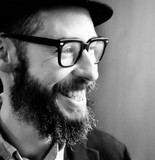 Ryan Lee Crosby is unlocking “a new road to both a global audience and personal awakening with inspiration in [the blues.]" -Michael Marotta, Vanyaland With an intercontinental band, Ryan Lee Crosby blends American folk-blues and North Indian raga into meditative songs of impermanence, compassion and joy. Through his music, Crosby hopes to inspire peace, openness and respect - for tradition, for culture, for each other and for one’s self. Crosby’s new album River Music integrates Mississippi hill country blues influences with textures of Hindustani raga. The improvised and composed songs are hypnotic, almost trance-like, led by Crosby’s dynamic vocals and masterful, single-line guitar melodies. Crosby describes himself as a ‘seeker’ within the music: producer and listener, performer and enthusiast, teacher and student. Crosby’s music-making is an inward process: creativity through meditation, devotion and discipline, but it is also oriented around community-building. As a bandleader, Crosby is guided by the potential of music to connect the internal to the external, the individual to the group, and to bridge seemingly disparate cultures and traditions. Crosby has evolved through many musical incarnations: the teenage punk-rocker, turned singer-songwriter, became a masterful blues-guitarist, and now student of chaturangui and Hindustani classical raga. Crosby tours Europe annually and select US regions. He lives in Boston, MA. - Annie March