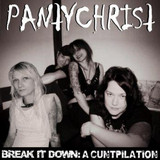 Taking elements from punk, hardcore and metal and shaking it up with a healthy dose of riot grrrl attitude, Pantychrist is a full throttle blast of estrogen fueled aggression: angry, intense and unrelenting. Hailing from Hamilton, Canada, the band formed in 2003 after the chance encounter of four women in a ladies washroom. Vocalist Danyell DeVille and guitarist Izabelle Steele met bassist Amy Hell and drummer Patty Rotten in this most unlikeliest of settings. Upon discovering that they all had similar musical aspirations they decided to form an all female hardcore punk group. Since their inception Pantychrist have went through member changes and periods of inactivity, but have a growing catalog of recorded output. 2011's Break It Down cd (D.O.R. Records) was a compilation of rare and out of print material taken from ShEPeed (2004), Demolition Dirty (2005), Never Love Anything (2005), Pantychrist (2007), Girls Next Door (2011) plus comp tracks and unreleased demos from 2010 and 2011. Pantychrist issued the track "No Gods No Masters" in early 2014 with the song appearing on radio and podcast year end Top 10 lists. The following year saw the release of "Have Yourself A Merry Little Christmas" on Cleopatra Records 'Riot Grrrl Christmas' compilation. Pantychrist are presently recording the tracks for their eagerly anticipated new album. The 2018 lineup consists of vocalist Danyell DeVille, guitarist Emma-O, bassist Jen O'Cyde and drummer Clara Danger.