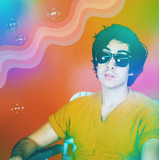 The pop/funk/R&B/soul singer that is Dylan Chambers has journeyed from Arlington, TX to Los Angeles, where the powerhouse vocalist has dug his heels in, coming a long way since the singer-songwriter tact of his debut record Vol. 1, expanding his oeuvre to meet the crest of a fuller, more robust sound, rooted in soul. Spinning up a string of new singles with longtime producer, Stefan Litrownik (Boyz II Men, Andy Grammer), Chambers is raring to garner the charm of timeless classics, having no scruples about citing modern stalwarts, such as Vulfpeck, Jacob Collier, Devon Gilfilian and all who are concerned with preserving the sanctity of soul. In the past, he’s collaborated with producer John Alagia (John Mayer, Herbie Hancock), critically acclaimed singer Haley Reinhart (American Idol, F is for Family) and Grammy Award nominated, multi-platinum jazz artist Dave Koz.