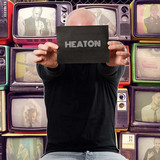 Heaton is a singer/songwriter from Manchester. He released his debut album 'Computer Music' back in 2005 which generated 5 mp3 number one's across unsigned music sites. This followed by numerous online collaborations, singles and EPs. The Manchester Evening News labeled him the 'Download King' and one of his collaborations with 'The Subway Collective' entitled 'Breathe' went on to feature in the myspace online drama 'Freak'. Despite releasing new music every year since his debut it took another 9 years for the official 2nd album 'Army of Sound' to surface in 2014. Heaton co-wrote the entire album over the internet with international producers and writers via SoundCloud and premiered the album with a live show in Manchester at the infamous 'Dry Bar' which was broadcast live across the internet via YouTube Live. With over 140,000 plays and views of his music and videos on Soundcloud and YouTube, Heaton continues to reach global audiences with his own unique sound.