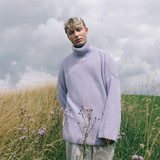 Gaspar Narby’s fusion of lush broken beats, downtempo melancholia and singer-songwriter reflection has been rewarded with a broad sweep of tastemaker tips from new music and electronica media alike. Now the 25-year-old Swiss artist is ready to share his new single, ‘Death & Other Things’ from his upcoming fourth EP, which will be released early in 2022 on Everybody’s Records. Both ‘Death & Other Things’ and the rest of the ‘Magnet Letters’ EP were entirely written, recorded, produced and mixed solely by Gaspar in his bedroom studio in Brockley, London. All of the new songs find Gaspar confronting his fears and anxieties. It’s also the first time he has put so much focus on his voice, having previously usually either called upon guest artists or used his voice as a texture rather than a dominant sound. Since debuting with ‘Home’ in 2017, Gaspar Narby has never repeated the same idea twice. It’s something which can be heard throughout each of his EPs to date. 2018’s ‘A Stare Makes Two’ simultaneously possessed free-wheeling experimentation, the warmth of live instrumentation, and an influence from his then-new home city of London. ‘Transatlantic’ then embraced the lo-fi ethos, as he recorded a solitary and introspective set of tracks primarily on cassette. The subsequent ‘Collab’ EP was the polar opposite, with all four songs the result of collaborations that delivered a broader pop edge.