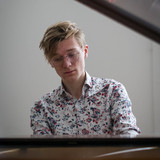 Liam Berry is a composer and educator hailing from the far-off land of Winnipeg, Manitoba. Inspired by the music of the past, he uses techniques he's learned from early, ancient, folk, and classical musics to write new works for the modern day — whether that be a feature length epic, or a little 8-bit game jammed out over a weekend. His works can be found dotting the landscape of Winnipeg film, theatre, and games, most recently including "Model Citizens", dir. by Taylor Carson Brown, which won Best Score at the 6th annual Winnipeg 48 Hour Film Festival, and was nominated for Best Score at the UW Film Festival. He can be found most weekdays teaching the piano, where his students learn to play, compose, and mostly mook around and have fun at the keyboard. When he's not writing music or noodling with other instruments on the side, he finds himself thoroughly distracted by a wide variety of hobbies, including beekeping, instrument-making, carpentry, calligraphy, acting, and gardening.Phpto Credit: Kenji Dyck