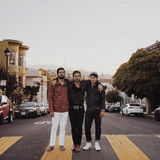 Eyes on the Shore

Featuring Eyes on the Shore

Songwriter duo Kayhan Golkar and Antrom Alexander have been writing music together dating back to 2004. They are now performing as a electronic psych duo called Mojaui.   Eyes on the Shore was their main project along side Cory Tauber Tauwoo on vocals from 2013 - 2017   The trio released two EP's and a full length album, and gained a lot of momentum from their lead single "Washed Away" in 2016.   Mojaui is the next creative chapter for Kayhan Golkar and Antrom Kury following their previous tropical psych rock band Eyes on the Shore.   After finishing a final tour, writing immediately started in Fall of 2017 at Mojaui Studios in San Francisco. Having spent the better part of a decade writing songs in a room as a rock band, the pair wanted to explore a completely different approach, with new sonic textures. Everything was written on synthesizers and a laptop.   This new approach led to a large body of songs, ideas and movements which they took up to a cabin in the Pacific Northwest. In 2018 they returned to California with a new concept and vision that became Mojaui - a name that joins two contrasting places that have inspired their writing: the Mojave Desert and the island of Kauai.   The debut album “Lunar Bloom” is coming soon.