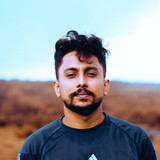 Enthusiastic individual passionate to make music and perform Armed with the innate courage and creativity of his parents, Shashika has been involved in various creative activities since childhood.

By the age of 10, he was playing local instruments such as Gata Bera, Yak Bera, Thammattam and later playing oriental instruments such as the Violin, Flute and Tabla. What made it special was that he taught it all alone without the influence of a third party. He honed his experience with several creations and released his debut EP Foresight in 2018 through his own record label, Hela Recordings. He enlists the support of local and foreign DJs such as R3SPAWN and Avadox. He then presented his creation BLXT to the 2019 Spinnin' Records' Blasterjaxx producer contest and won second place on the chart. In the same year, he remixed Prisionera, a popular song by Romanian singer Otilia. It was released in 2020 via Otilia's Memories album via Jhaps Records. Otilia was the artist named the 2017 Best Balkan Artist. Continuing his musical career, he joined Trend Base, a world-renowned YouTube Music brand, in 2021 to launch their record label. For that, he produced the latest single Upside Down. Its music video was released on the Trend Base YouTube channel. Back in 2021, he produced a remix for the popular Bulgarian singer Andrea's popular song Amor Peligroso. It was released via the Jhaps Records YouTube channel.