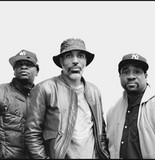 Jungle Brothers have been around since hip hop's Golden Era and are the longest running Hip Hop group in the world. They continue to adapt creatively to the changing soundscapes of both hip hop and DJ culture. Afrika Baby Bam and

Mike G have been experimenting since they first appeared (then with DJ Sammy B) on the NYC hip hop scene with the release of the ground-breaking 'Straight Out The Jungle' in 1988.