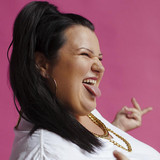 alyona alyona, former nursery teacher, who is changing Ukrainian rap Alyona Savranenko, better known by her stage name "alyona alyona" was born in small Ukrainian village called Kapitanivka. She graduated from Pedagogical University and was working as a nursery teacher in a small village outside Kyiv, earning the equivalent of $200 a month. Her first music video Rybky (Fishes) in October 2018 went viral on YouTube and has meanwhile collected over 2,5 million views. In this video she, plus-size, in a bathing suit was cruising around a lake on a jet ski.

Her first album “Pushka” became the best album of 2019 according to Music Awards "Yuna". 6 months later she dropped the second EP “V khati MA”. Now Savranenko is recognized everywhere she goes. alyona alyona was featured in the top international media: Vogue, Independent, The New York Times. Highsnobiety: 10 WOMEN WHO ARE KILLING THE HIP-HOP GAME RIGHT NOW Her other recent music credentials are: Anchor Award by Reeperbahn in Germany, Forbes 30 under 30,