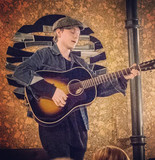 With his slightly hoarse, mesmerising voice and astonishing guitar playing, you can call Mike Wyatt a troubadour in heart and soul. Wyatt's songs appeal to the imagination by flirting with blues rock and neosoul. He translates emotions just as expressively with guitar as with voice, making his songs packed with exciting twists. Wyatt has toured supporting Selah Sue, played festivals and shows all over from Rotterdam's 'Stille Nacht' to 110 Above Festival, and had his debut single 'Somebody Better' receive national BBC radio 6 play and selected as BBC Introducing's Track Of The Day.