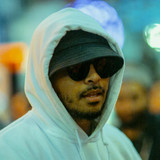 Embracing a hometown-built reputation for dynamic on-stage energy, and matching it with equal fire in every release, Melbourne’s Jordan Dennis is on a fast-rising come up, garnering attention from Australian tastemakers at every turn. From Dennis’ debut solo release in 2018’s neo-soul bop “Crumbs” feat. Blasko,

harder-hitting follow-up in “Glide Freestyle”, and 2020s Doc Marty and The Link, the whip-smart MC has continued to evolve in his expression with a fierce lyrical aptitude on display, first and foremost. Now with solo success at his doorstep, citing influences among the likes of JID, J. Cole and Mick Jenkins, Dennis’ confidence has surged from freestyles among his closest confidants and a supportive musical family to shaping his solo act and climbing to stardom in a minute. His fervour from strength-to-strength has cemented a tight signature, unafraid to curve between genre and showcase an ability the nation has only tasted. Dotted between, Dennis’ a sharp-witted character has also appeared on tracks by POLOSHIRT, 3K, ThatKidMaz, Dugong Jr, Tentendo, and ongoing works with Billy Davis.  Dennis has also injected his shockwave spirit into the Triple J Like A Version studio on multiple occasions, with guest spot features alongside Goldlink and more recently with his own original verse on Tones And I's rendition of Forever Young.  Jordan Dennis first emerged as the front man for Billy Davis, whose 2017 album Family Portrait launched to international acclaim.