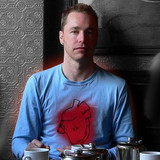 Eric Eckhart is a Berlin/Ireland based, American independent alt/folk/indie pop singer-songwriter and producer whose 2019 album 'Luminous' was nominated for Ireland's Album of The Year.“ The songs that make up ‘Luminous’ were written in the time between the home birth of my second child and the death of my parents not long after and reflect the extremes of life and death, darkness and light, love, hate and forgiveness, peace and war – all of which are part of our ever more polarised world we live in today.”“For the first time, I took full artistic control by playing most of the instruments myself as well as recording alone, often in one take in that magical moment when the song was just written and played through for the first time in all its rawness and wonder.” REVIEWS “Gifted troubadour… a considerable songwriting and vocal talent…  Eric the king” – Hot Press magazine “A classic songwriter” – Die Tageszeitung “One to watch out for” – Irish Times “Beautiful… with a rare honesty… a virtue in today’s time…musical revelations that give your aura a warm hug” – Oh Fancy “Epic, powerful” – Westzeit “Above all, honest and authentic” – Music Scan Germany “So much optimism, hope and insolent youth…a very successful, energetic, mature interpretation of the category “Singer-Songwriter” – Shitesite “Simply rich songs… composed together beautifully” – OPAK