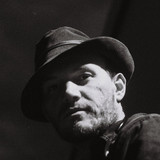 Berlin-based Australian folk troubadour Michael Brinkworth writes and sings in the tradition of the timeless greats. Imagine The Band, Neil Young, Bruce Springsteen, Bob Dylan and Tom Waits all taking a road trip through the Australiana heartland, with Wilco and The Replacements on the stereo all along the way. A tireless international touring act, Brinkworth’s backpack is stuffed full of heartfelt, roadworn songs. Rhythmic country guitar, entrancing harmonica and a soulful voice combine to take the listener on a journey and expose the rawness at the heart of his songwriting - vulnerable, sincere, and as honest as an old pair of traveler’s boots. Greywood Records released Brinkworth’s debut album Somewhere to Run From in 2017, to high critical acclaim from several publications such as Roadtracks and Lie in the Sound, following several self-released CD-R compilations and collaborations with other Berlin-based artists, such as Temple Haze. His 2nd album, Wasted Wonder, recorded with his full band at The Famous Gold Watch Studios in Berlin, will be released by the studio’s label collective on 21 May 2021. UK music blog A&R Factory praised 1st single,

One More Time (Just for Fun), “for any fans of Kurt Vile”. Liguria was premiered on Berlin’s Radio 1. Force of Nature, Falling in Love With a Broken Heart, Good Old Feeling and King of Indecision all got play-listing coverage. Last single and album opener Thick Skin has had national airplay on Triple J, Double J and ABC radio.