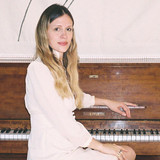 Her music has been covered from Vogue to Pitchfork to The New York Times and has been heard on HBO’s GIRLS, Gray’s Anatomy, and Olivia Wilde’s Booksmart.