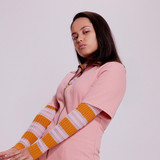 With love from global superstars Lizzo, Billie Eilish and a swarm of loyal day ones, Paige is on the come up. Raised in the overly-connected world of the internet, the young singer-songwriter from rural Clark’s Beach, New Zealand opened her window to the blue-screened universe in 2016 with a humble YouTube channel and acoustic guitar. Paige uploaded covers of songs that permeated a generation, eventually sharing originals with her growing fan base of subscribers. Paige independently released her debut EP in 2017 which signaled her arrival in the music industry, followed by her successful singles ‘So Far’ and ‘Alignments’ the following year. The 22-year old went on to find her home with Sony Music, collaborate with fellow kiwis, Balu Brigada (‘Slow Dive’) and JessB (‘So Low’) and support the likes of Nina Nesbitt, George Ezra, Ruel and kiwi sensations, Drax Project. In 2019, Paige performed support alongside kiwi legend Dave Dobbyn, Mitch James, Church & AP, and more on the iconic Six60 New Zealand stadium tour. Teaming up with acclaimed producers Josh Fountain and Djeisan Suskov, of LEISURE, Paige released a hearty brew of singles in the last year including fan favourite ‘Too Much To H8’ and label debut ‘Bloom’. Writing songs is a way of life for the 22 year-old. For someone so young, Paige carries an old soul sensibility & isn’t afraid of getting real. Just like a bee, Paige flutters between catacombed thoughts of the heart as she invites us into her cozy space.