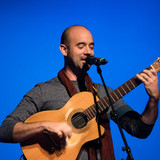 Eric Harper is an Emmy-award winning musician who creates a style that is not only all his own, but his music is melodically entrancing, virtuosically ferocious and harmonically soul-stirring to the core. Eric released his first solo album in 2008 entitled "Romper a Madrugada" which was played in countries all over the world from Portugal to Brazil, the Azores and Madeira island, Canada and the States. After that he release his self-titled CD "Eric Harper", in 2010, garnering the attention of people like Rainn Wilson from The Office and Grammy-Award Winning Producer KC Porter. In 2013 he released his instrumental CD entitled "Ribeira" showcasing his virtuosic guitar skills playing in the styles of Flamenco and Fado. Since 2000 Eric has won multiple awards not only for his guitar skills but also for his Film Scoring talents. He has had music placed on over 1000 TV shows to date and has scored several movies. Eric's live show is quite the spectacle of blending his hilarious and heart-felt story-telling along with his mad guitar skills and soulful voice. Anyone who sees Eric is guaranteed to laugh, cry and dance in their seat. Eric has performed all around the globe from Portugal to China, Canada to Mexico, Switzerland to Israel, France to Spain and many more countries.